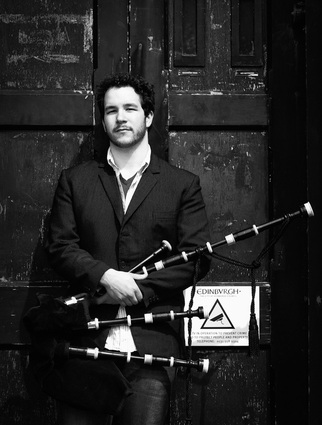 Benjamin Miller is a player of Scottish smallpipes and Border pipes whose repertoire and
style draw mainly on the Gaelic traditions of Western Scotland and the Canadian
Maritimes, blended with a healthy dash of Irish tunes for good measure.
Originally from the Lake George area of Upstate New York, Ben currently lives
in Edinburgh, Scotland, where he recently completed a post-graduate degree at
the University of Edinburgh's School of Scottish Studies. Ben's interest in
traditional music stems from his exposure to the bagpipes at a young age, in
his home town of Queensbury, as well as his family's strong connection to it's
Scots-Irish roots, through both his American mother and Canadian father. He
began studying the Highland Bagpipes around age eight, but by twelve he began
to shift his focus to the bellows-blown Scottish smallpipes and Border pipes.

Although Ben began his musical career playing with several competitive pipe bands,    including the internationally acclaimed Scotia-Glenville Pipe Band, since his late teens, he has shifted his focus to pursue traditional Scottish and Cape Breton dance music. This journey has taken Ben across the Canadian Maritimes and to Scotland, to play and learn with many of the leading proponents of this style today. As an academic, Ben has focused on music theory, musicology and Scottish ethnology, at both the undergraduate and postgraduate level. His undergraduate thesis has explored the evolution of piping, as related to dancing, in both New and Old World communities. His post-graduate dissertation expounded upon this idea, analysing the role of dance music in the modern context, for traditional musicians in Nova Scotia and Prince Edward Island. Ben writes regularly for Piping Today magazine, and continues to enjoy exploring the intricacies of his own musical tradition in the ethnomusicological context. Ben is currently involved with several musical projects, including the Edinburgh-based quartet, Larsa. He is also a regular member of Edinburgh's vibrant session scene, and can be found throughout the week hosting sessions with friends across the city.