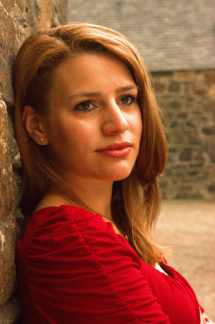 © Ruth O' Sullivan
Sophie Stephenson is a traditional musician and step dancer from Fort Augustus, in the Scottish Highlands. Introduced to step dance by Harvey Beaton at Sabhal Mòr Ostaig on the Isle of Skye, Sophie continued to build on her repertoire of steps, learning from dancers including Donal Brown, Frank McConnell, Deirdre Graham, Jane MacNeil and Margie Beaton.

Stemming from an upbringing in Highland culture, Sophie has a passion for traditional music and dance which she has pursued through academic study. Research into performance contexts and the traditions of the Taigh Cèilidh in Scotland and Canada formed part of her honours degree in Scottish Literature and Scottish Ethnology, with the School of Scottish Studies at the University of Edinburgh. In 2013 Sophie was awarded the Lisa Ullmann Dance Scholarship which allowed her to follow her interest in emigrant traditions across to the Canadian Maritimes. She travelled to Prince Edward Island and Nova Scotia to meet with dancers and explore Cape Breton and Acadian dance traditions within their community context.


​Sophie is particularly interested in the rhythmical relationships between language, music, song and dance. She is the founding member of trad group Huradal in which dance is an integral part of performance both as a percussive response to the music and also a rhythmical impetus behind the musical arrangements. Sophie has also developed TradBeats, a project which brings together the core elements of voice and movement through rhythm, with Gaelic mouth music, beatboxing, step dance and body percussion.

Sophie is currently involved in various creative projects including THREADS, TradBeats and Huradal and is also a regular tutor with Fèisean nan Gàidheal.