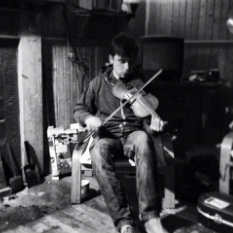 Jamie Robert MacDonald is a native of the Isle of Tiree and has grown up immersed
in the Gàidhlig music and culture of the island. A multi-instrumentalist, Jamie plays
fiddle, pipes, and whistles and has played for many an island dance with various
cèilidh bands. Brought up bilingual and fluent in Gàidhlig, Jamie’s repertoire of
puirt-a-beul and old, Highland tunes is complimented by his understanding of the
song tradition which flavours his playing style. His performances in Gàidhlig song
include singing and conducting the Lews Castle College Benbecula Gàidhlig Choir
as part of a concert showcasing material from the Tobar an Dualchais archives at
a concert during the Celtic Connections festival in Glasgow 2013. Jamie has
collaborated as fiddler on the Sophabulous Steps step-dance project since moving
to the Outer Hebrides in 2012 to study for the HNC music at LCC Benbecula. Jamie
also plays fiddle with the Dùn Mòr Ceilidh band.